We analyze the frequency of droughts in our model region of Northeast Lower Saxony based on future climate model projections for three emission scenarios. As an indicator for droughts, we use the soil moisture index (SMI) down to a depth of 1m. The SMI is calculated using the mesoscale hydrologic model (mHM) developed at the Helmholtz Centre of Environmental Research (UFZ). This indicator is also used for the German Drought Monitor (https://www.ufz.de/index.php?en=37937) and is suitable to represent agricultural droughts.

In Fig. 1, we show a 30-years running average of the number of months per year and for the growing season in which the SMI < 0.2 to indicate drought and SMI < 0.1 indicating severe drought. 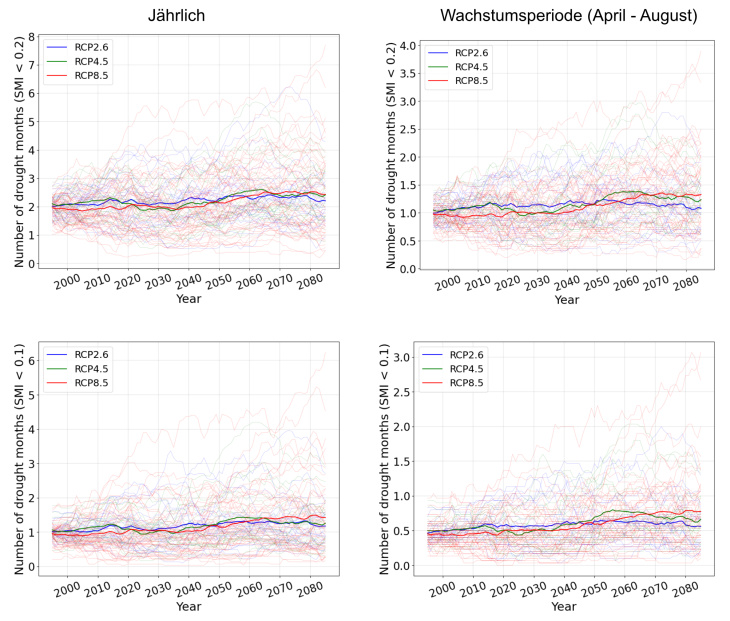 Fig. 1: 30-years running mean of the number of drought months annually (left) and for the growing season (right) for SMI < 0.2 and SMI < 0.1. Thin lines indicate individual models and thick lines the model mean for the respective RCP.

In Fig. 2, we examine how frequently a drought event as in 2018 will occur in the future. To do this, we calculate the mean SMI for summer (June, July, August) 2018, i.e. SMI (JJA) = 0.045. Note that the SMI indicates a very severe drought well below 0.1. We then highlight the years with a mean summer SMI below 0.045 in each model (met indicates the different model ensemble runs) for the different RCPs.

We find that the frequency of agricultural droughts is much higher for RCP8.5 compared to RCP2.6 and RCP4.5.