We simulated using a crop process-based model called EPIC to test the adaptation potential of several management strategies including crop calendar options and irrigation fractions based on the field capacity under three climate scenarios (RCP 2.6, RCP 4.5 and RCP 8.5). Besides NELS, the simulation included also seven districts located in Southern Lower Saxony (SLS). The main goal was assessing the influence of irrigation and crop calendar on silage corn yield and water balance.

A restriction of this framework is the use of only one climate model, which showcases only one theoretical possible trajectory. Precipitation amounts for Harburg (in NELS) and Holzminden (in SLS) are 7000 m3 lower than the rest of the districts during the growing season, which explains the higher losses.

Corn and winter present different behaviors under the same management combination for both future periods for RCP 8.5. The model calculates the number of days in which the crop is stressed due to lack of water or deviations from optimum growth temperature. Figures 5 and 6 depict which of these two types of stresses significantly impact crop development. In the case of corn, we can observe that water stress plays a more prominent role. Thus, irrigation may mitigate these negative impacts. On the other hand, wheat is more affected by temperature stress compared to water stress. Adjusting its crop calendar is not sufficient to avoid yield losses, especially for 2070-2100, in which water stress increases slightly as well. 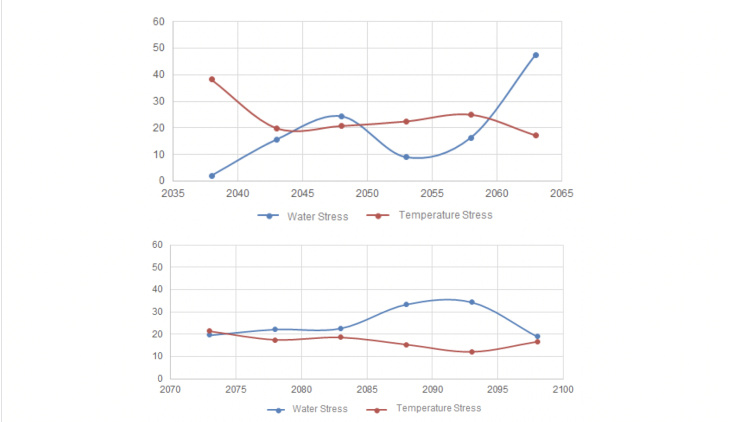 Fig 5: Stress days for corn. Blue line represents stress due to lack of water and red line due to temperature. Left side depicts the stress development for near future, and right side for far future.

Fig 6: Stress days for wheat. Blue line represents stress due to lack of water and red line due to temperature. Left side depicts the stress development for near future, and right side for far future.